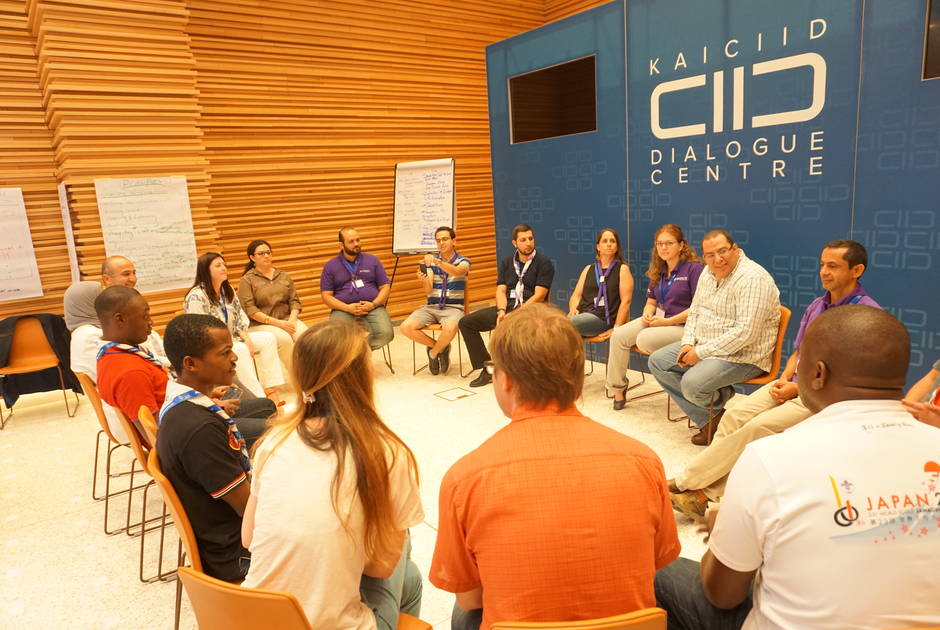 Over 2000 youth have benefited from the Dialogue for Peace Programme, implemented since 2015 by KAICIID in collaboration with the World Organization of the Scout Movement (WOSM). Only this year, dialogue trainings reaching over 500 youth took place in Austria, Belarus, Myanmar and Zimbabwe, ahead of an upcoming training of trainers scheduled in Panama for September. During this active holiday season, 4 beneficiaries of KAICIID’s main youth programme reflect on the role of youth in dialogue and their own experiences after being trained and becoming trainers themselves.

In the following interviews, Nargiz Balakishiyeva, Azerbaijan; Seruya Damasco, Curacao, Jude Essosolim Assoti, Togo; and Myo Htut, Myanmar, ranging from 19 to 30 years old, talk about how they have been changed by their dialogue experiences and the importance of training youth in dialogue. They believe young people are very open minded and passionate, which makes them invaluable multipliers when they are convinced about the importance of something, dialogue in this case.

They have learned that dialogue is key in conflict prevention and peacebuilding, and they think that working with youth can prevent problems in present and future generations. And although they know the theory, they acknowledge the challenges of applying it at the personal level. Despite the struggle, however, they are still powerful dialogue ambassadors, convinced that practice will make them stronger every day.

Nargiz Balakishiyeva: “If you want a dialogical person, it is better to get the skills while you are a teenager” 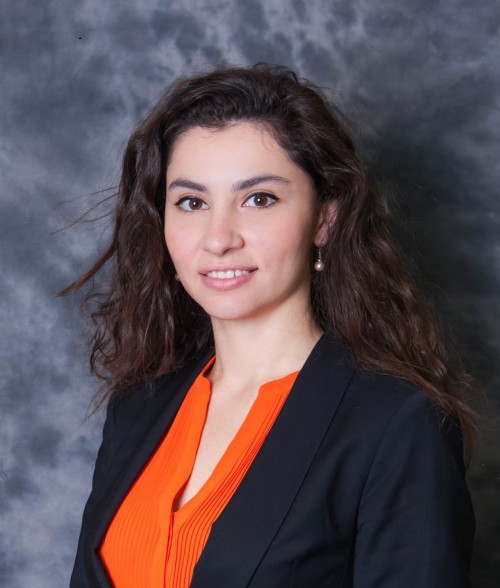 Nargiz Balakishiyeva, 30, an Azerbaijani PhD student and lawyer working for Ernst & Young, has been involved with the Scouts Movement since 2008 and participated in her first KAICIID-Scouts Dialogue for Peace Training in 2017. Since then, she has helped train over 200 scouts. “Honestly, before the trainings I had some ideas about dialogue, but I wasn’t into that. I wasn’t researching in that direction. But after being more involved with KAICIID’s work I learned the theoretical part and started to realize how it could be applied,” she says.
“Now, when conflict happens, I can easily identify its stages and how to deal with it, it’s no longer an unconscious behavior. I already have the map in my head,” she explains. As an adult volunteer in scouting, she can also see now how trainees seek to apply dialogue to real life situations. It is motivating for her to see the faces of surprise of young people when they understand how easily they can avoid conflict escalations through the use of dialogue. “It feels really good to see that when I facilitate a workshop. Also, some participants approach us saying they know how they can help to manage some problems. I can already see in some of them the seeds of a dialogical person”.
Nargiz believes many current international conflicts could have been avoided through dialogue at an initial stage. And at the same time, she believes dialogue ambassadors are created at an early stage in life. For her, it is particularly important to train young people in dialogue for peace. “When you are young, your problem in reality is not so big. And if you learn to handle conflict from the very beginning, it will go with you through the years. When you become an adult, conflicts will not come to the stage of violence or be left unresolved. Later you become less flexible, less open. Afterwards, it is difficult to change behaviours and minds. If you want a dialogical person, it’s better to get the skills while you are a teenager”, she adds.
She mentions that some scouts become involved in politics, or have influential positions later in life. By providing them with dialogue skills, she argues, they are being prepared to take a place on the global stage.

Seruya Damasco: “If we apply it in our daily life, we will have a snowball effect” 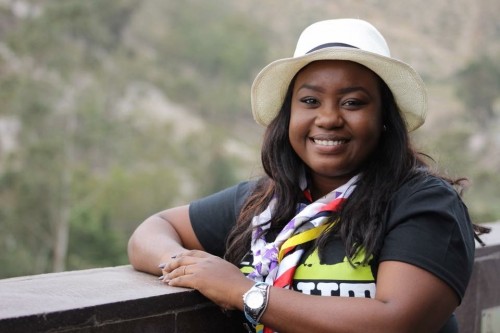 When Seruya Damasco, 22, returned to Curacao after her first dialogue training, she shared all her new knowledge and discoveries with her parents. The conversation was an eye opener for her mother, just as it had been for herself. “I knew about dialogue as in a conversation of two persons, but I did not know the proper meaning of having a dialogue. After encountering KAICIID and the partnership with WOSM I know it is something that goes beyond that”, she explains.
And in the same way she initiated a conversation with her parents about dialogue, she believes young people apply and share any other valuable lessons they learn, which to her justifies investing in youth and offering them dialogue trainings. “If we apply it in our daily life, we will have a snowball effect,” she says.
Seruya, an active scout who studies international communications and works as terminal supervisor at the airport, thinks that if people knew more about dialogue, conflicts around the world could be avoided, beginning at the family and work levels. “Daily situations would not escalate. Dialogue is something we all need. Even coming from the same culture, we have different ways of perceiving things, but we have to try to understand the other, see the two different sides, and come to a common ground”.
She participated in her first two-day dialogue training in 2016, at the Inter-American Youth Forum in Houston. She then attended a training in Azerbaijan in 2017, and one this year in Curacao. She praises the KAICIID/WOSM collaboration, and she refers to the syllabus in use as one that “is really practical for our ages, not just theory, but including practice to explain dialogue”.
While she prepares to be a trainer, she has already trained others in her country. She engaged in a very enriching dialogue with Muslim participants in Azerbaijan: “We don’t have so many Muslims in this part of the world, so I sat with some there and asked them to explain how things are. I learned a lot from that experience”, she recalls.

Jude Essosolim Assoti: “A well trained young person will be a responsible citizen in the future” 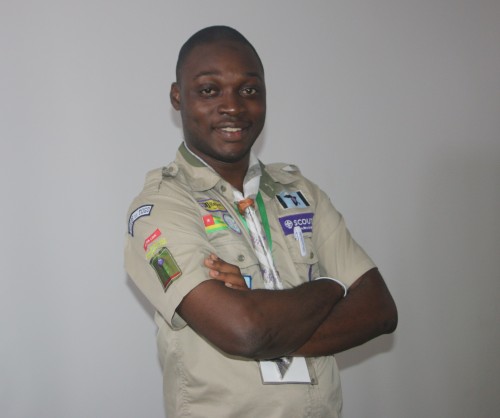 Jude Essosolim Assoti, 29, a scout and journalist from Togo, has been involved in six dialogue trainings, two as a participant and four as a trainer. “I was always interested in dialogue, like many people are, but the notion of dialogue was not clear until I learned from KAICIID all aspects of dialogue and started practicing myself”, he recalls.
He has been part of the Dialogue for Peace programme since its beginning, when in 2015 he participated in the first Training of Trainers for Scouts in Vienna. Later, his first activity as a trainer was in Japan, at the KAICIID tent at the 23rd World Scouts Jamboree, receiving participants from all over the world. He is committed to training others in dialogue and in particular, youth, as he believes this will have a greater impact on the future.
“When you are no longer young, it is difficult and sometimes even impossible to change. But young people are open-minded and easier to shape. A well trained young person will be a responsible citizen in the future. Besides, some young people are doing amazing things in the community. If you don’t share your knowledge with them, it is difficult to have a real impact,” he says. With the scouting method, through games, learning by doing activities and discussion, he believes that trainees become aware of the challenges and can help in addressing them.
Motivated by his travels in Togo and abroad, he is mostly interested in intercultural dialogue: “Not only people from Asia, Europe or Africa don’t know Togo and the Togolese people. Sometimes countries that are only a four hour car ride away have very bad perceptions about us and us about them. That’s why I am convinced that intercultural dialogue is very important.”
Jude considers himself a dialogue ambassador and despite the challenges on a personal level, he takes this role very seriously: “It means I accepted the challenge to make a better world through my attitude, actions and initiatives; to make living together easier by sharing what I learned and help others dialogue. Sometimes it feels like you are doing nothing or can’t achieve it, but when you are convinced, you still continue because you made a commitment and as a scout our word is to be kept whatever the situation is.”

Myo Htut: “Youth can embrace diversity for a better life” 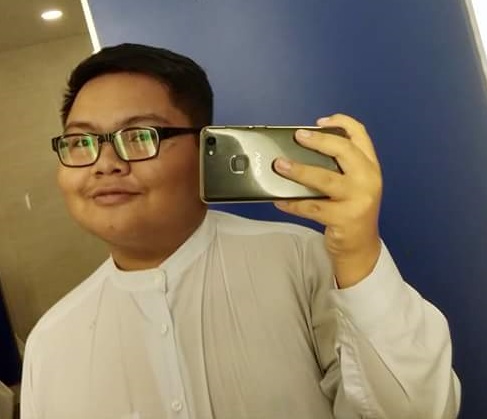 Myo Htut, 19, is studying at Myanmar’s Yangon University of Education, preparing to be a teacher. After his graduation, in 2020, he is planning to work at a public school in Myanmar. His classrooms will be as diverse as the country itself, with over 135 recognised ethnic groups.
Belonging to an ethnic minority himself, the Mon people, Myo became interested in dialogue after reading about governmental efforts to address ethnic and religious problems in his community through dialogue. “Dialogue is very important for our country, because we have ethnic wars happening and the Rohingya issue, and dialogue is the way to promote peace,” he says. With this motivation, he participated in a KAICIID facilitators’ training in Naypyidaw, Myanmar, which took place in July 2018.
After the dialogue training, he engaged in dialogue with people that did not recognise Rohingya or Mon people as part of Myanmar. “We can have different beliefs, religions and cultures, but we are all humans, we are the same. That’s why we need dialogue, that’s why it’s so important. We need to find solutions to the problems and misunderstandings happening around us through dialogue,” Myo explains. He has been promoting dialogue in his university as part of the English and Debate clubs: “First, I share what I learned at the training and the following week, we have a dialogue”.
For him, dialogue starts within his circle of friends. “My friends and I have different backgrounds, and we have had problems related to our cultures, beliefs and ethnic groups. We ourselves need more and more dialogue to live in peace. I am the only one among my friends who accepts other religions, I have Christian, Buddhist and Muslim friends and we all do have to dialogue to better know each other, accept each other and to live in peace.”
Myo knows that it is important to train and engage youth in dialogue, as he is convinced of the power of youth to conduct change. “Young people are very open-minded, more than adults. Youth are very open to learn and can achieve what they want. Youth are becoming more educated and can understand others' feelings and problems, they can embrace diversity for a better life”.

Located midway between the Middle East and Western Europe, Serbia was hit hard by the “refugee crisis” of 2015. Fleeing war... END_OF_DOCUMENT_TOKEN_TO_BE_REPLACED

At a time of increased anti-Semitism, anti-Muslim hate, and xenophobia in Europe, it is a powerful moment when a rabbi and... END_OF_DOCUMENT_TOKEN_TO_BE_REPLACED

Humanitarian assistance is best administered face-to-face. Being able to look into a person’s eyes, to hold their hand or... END_OF_DOCUMENT_TOKEN_TO_BE_REPLACED