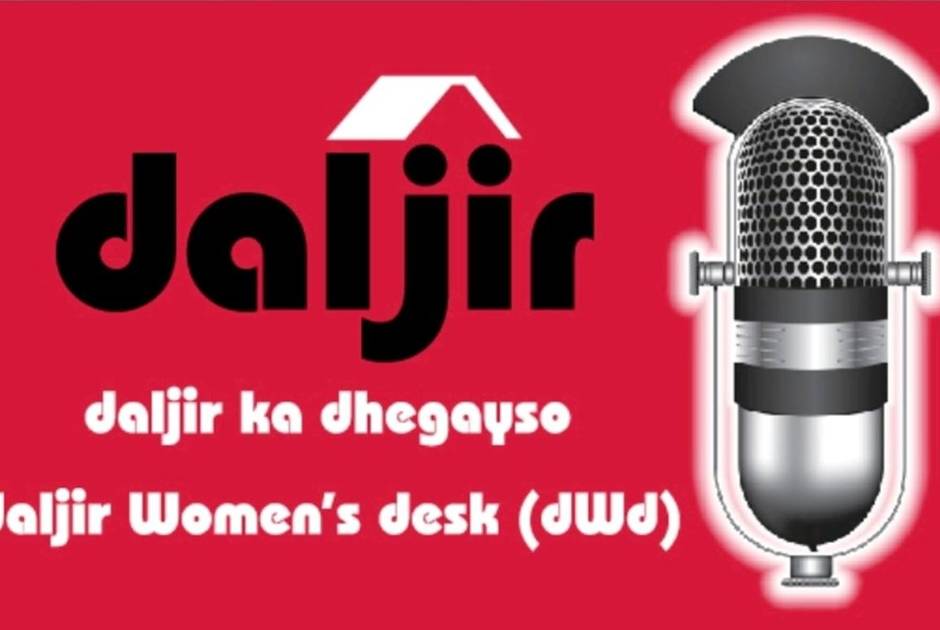 Radio Daljir, the largest network of FM stations in the country.

In Palestine, the pandemic exacerbated an already dire economic situation, stretching the capacity for emergency response to the breaking point.

According to the United Nations, Palestinian women were disproportionately affected by the pandemic – experiencing higher rates of unemployment, increased threats of gender based violence, and lower rates of political and community engagement in shaping humanitarian response to the virus. Many women’s organizations also reported severe funding cuts, putting them at risk of closing during a time when they were needed most.

In the face of these immense challenges, Fidaa Abu-Turkey, Chair of the Palestine-based IRADAH Organization, mobilized approximately 100 Palestinian women from diverse religious backgrounds   to shape humanitarian and policy response to the pandemic. Her organization seeks to give women economic, social and political empowerment and uphold their human rights.

Abu-Turkey’s project was sponsored by KAICIID’s Dialogue-60 Project, launched in 2020 under the umbrella of the Interreligious Platform for Dialogue and Cooperation in the Arab World (IPDC). The Dialogue-60 projects tackle COVID-19, combat hate speech or promote common citizenship through interreligious education and awareness. To date, they have been implemented by 44 organizations and 16 individuals across the Arab Region.

According to Abu-Turkey, her project was “the first civil society initiative to respond to the health and social impact of COVID-19 in Palestine and targeted mainly Palestinian refugee camps in the West Bank.”

Bringing together women religious leaders from diverse backgrounds including Christian, Muslim and Samaritan, participants were tasked with raising awareness of the role of women in preventing the spread of COVID-19. They also distributed kits including soaps, masks and other essential goods.

Abu-Turkey relied heavily on television and radio interviews with women religious actors to promote her initiative and talk about the social and health consequences of COVID-19. ​​“Using television and radio as a means to talk about the initiative was essential to [IRADAH], as people were not able to gather physically during the pandemic. Reaching out to them through these channels was key.” 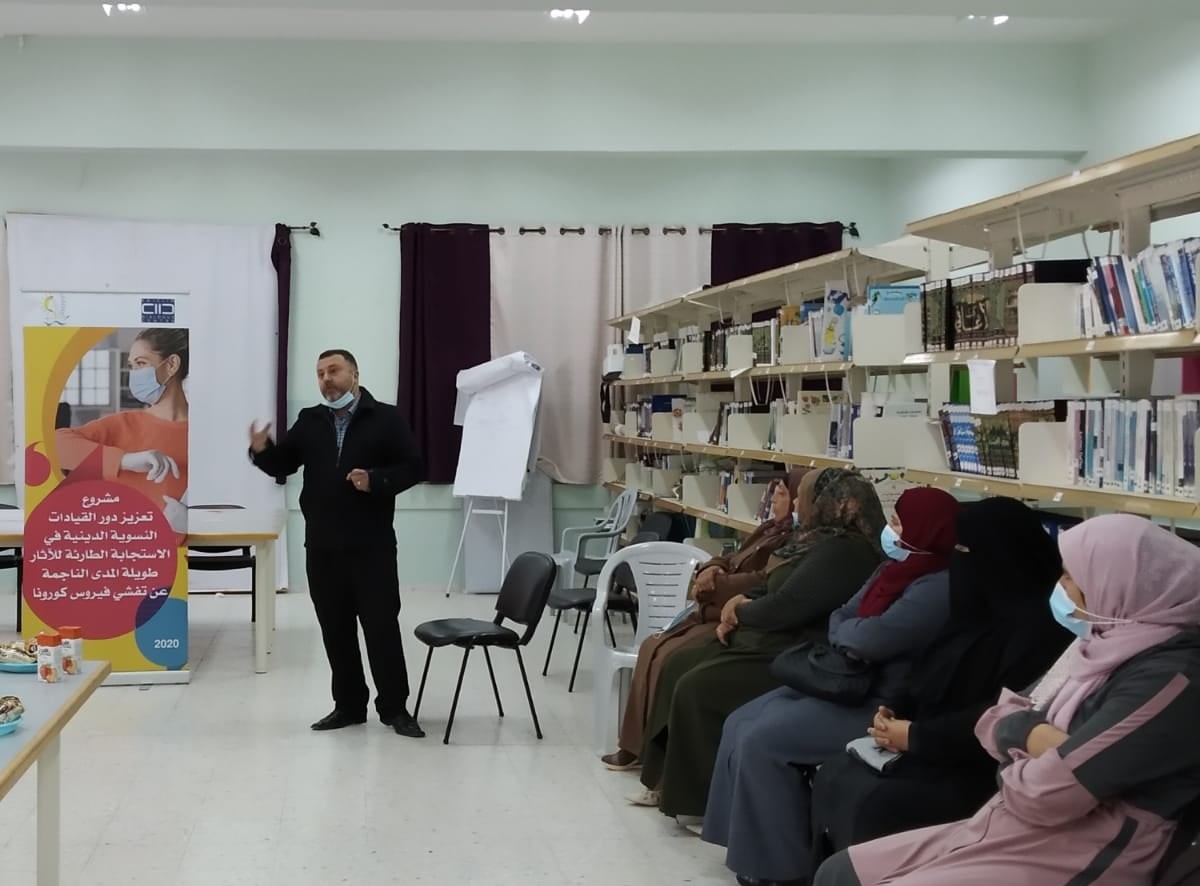 A Dialogue session conducted by the Palestine-based IRADAH Organization

In addition to humanitarian relief efforts, Abu-Turkey also hosted five dialogue sessions, which discussed women’s participation in policymaking, as well as the crucial role of women religious actors in confronting the long-term effects of COVID-19 – including unemployment, hate speech, gender-based violence, and barriers to education – on marginalised communities.

Following the dialogue sessions, participants developed a strategy document which was signed by 300 women leaders, religious actors, community and political leaders and members of the media. Recommendations included the establishment of a permanent office in Palestine to conduct a monthly review of the needs critically affected women, improvement of social services which are not based on religious or ideological lines, the use of diverse religious platforms (Muslim, Christian and Samaritan) to reduce hate speech against women, particularly in light of the pandemic, and a call for the Ministry of Education to include curricula which promotes religious tolerance and rejects extremism.

In Somalia, Radio Daljir, the largest network of FM stations in the country was facing a different kind of challenge. Despite guidance from senior Muslim leaders to follow health guidelines and social distancing, reports surfaced that some mosques had informed congregants that Muslims were immune to COVID-19.

“At the beginning of the pandemic, rumours and fake news were spreading on social media saying that COVID-19 does not affect Muslims or Africans and that it is a disease that God intended on ‘non-believers,’” said a representative from the radio station, who asked to remain anonymous.

In response to the disinformation, Radio Daljir launched a Dialogue-60 initiative titled, “COVID-19 is Not a Disease to Other Religions.” According to the station representative, “people are highly vocal in Somalia, as the country has the highest illiteracy rates among African countries…Therefore the radio management felt responsible to set out programmes to counter fake news regarding the pandemic.”

Over six months, Radio Daljir hosted regular broadcasts which provided a reliable source of information about the health crisis. "COVID-19 will affect anyone regardless of their faith or skin colour,” the station representative said.

The programme heard from guests including local community and religious leaders who stressed that “COVID-19 was non-discriminatory and could affect Muslims as much as non-Muslims.” It also invited doctors and medical experts to talk about the effects and rate of spread of the virus, as well as politicians who outlined response plans and preventative measures.

The broadcasts reached approximately two million people in Somalia through 15 radio programmes and five public service announcements aired on the radio and online.

Hani Dawah, a member of the Executive Committee of the IPDC, which sponsors the Dialogue-60 Project, believes that faith-based organizations and religious actors have a vital role in combating the negative social impact from the pandemic, as demonstrated through IRADAH and Radio Dalijir’s initiatives.

“Although the pandemic had negative effects on all aspects of life, it also brought people together and unified religious leaders’ efforts to respond to it,” she said.

In 2020, the Dialogue-60 project spanned 60 initiatives in 15 countries across the Arab Region, including 186 training and dialogue sessions, 24 awareness and advocacy campaigns, and the development of a mobile app. The initiatives have benefitted 8099 people directly and reached over 5.5 million through radio, video and social media.

Based on their success, both IRADAH and Radio Dalijir have secured renewed sponsorship for 2021.

Features
“We Practice What We Preach”: Four Friends Promote Interreligious Dialogue in the Arab World by Setting the Example
Features
In Morocco, Online Seminars Provide Advice on How Faith Actors can Address the COVID-19 Crisis
Features
Theatre for Change: Bringing Psychodrama to Saudi Arabia
Features
Songs of War Become Songs of Peace in Sudan

Historical and archaeological sites, along with ancient sculptures, monuments and manuscripts stand as a testimony to our... END_OF_DOCUMENT_TOKEN_TO_BE_REPLACED

Father Nehme Saliba was born in multicultural Lebanon in 1974, the same year that the civil war broke out. Having lived his... END_OF_DOCUMENT_TOKEN_TO_BE_REPLACED