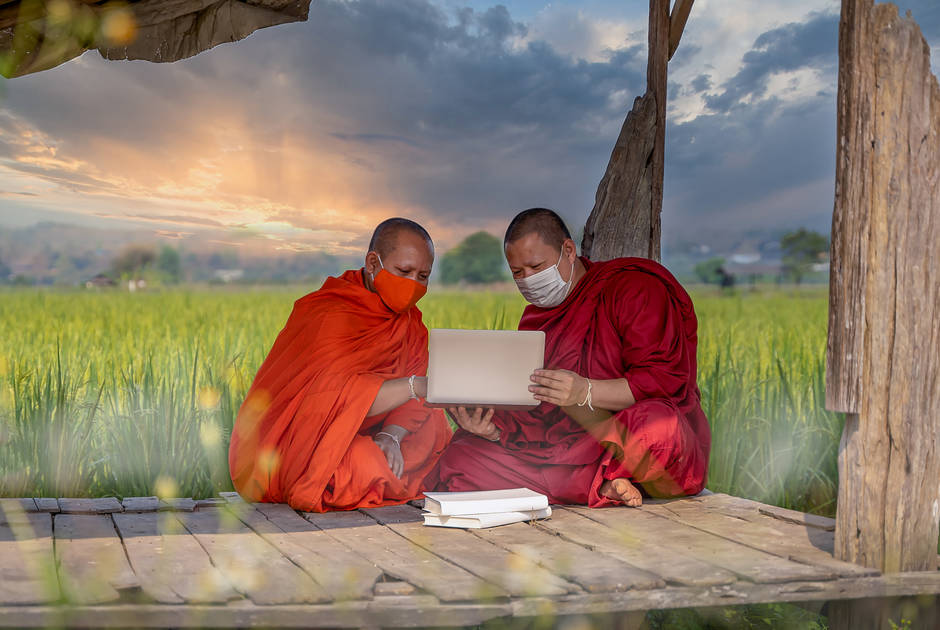 The COVID-19 pandemic has changed society forever, including the ways in which individuals work, interact with one another and worship. Although this has posed many challenges, it has also provided unique opportunities, particularly online. Through KAICIID’s support, Fellows Alba Sabaté and Swati Chakraborty are leveraging the power of the internet to unite different religions and foster greater dialogue during the lockdown.

According to a study by App Annie, a mobile data and analytics platform, time spent using apps and games on Android mobiles increased by 20% worldwide during the first four months of 2020, compared to the same period in the previous year.

Similarly, the analytics company Comscore also reported major increases in social media usage across Europe. During the first weeks of lockdown, the use of social networks such as Twitter, Facebook, Instagram or LinkedIn increased by 55% in Spain, 30% in Italy, 11% in Germany and 18% in the UK. With millions of people confined to their homes, social media usage rates grew significantly worldwide – a trend which only intensified in the following weeks.

“Religious communities have rolled up their sleeves in the digital world”

Alba Sabaté, Deputy Director of the Blanquerna Observatory of Communication, Religion and Culture in Barcelona, says that religious communities have made major digital advancements since the lockdown began.

"It was a change that otherwise could have taken years, and even decades, but it took place within 10 days at most. All the communities wanted to replicate the way of living their faith through digital platforms, mainly video," Sabaté said.

"We were surprised because, at the beginning of the pandemic, religious communities were ‘rolling up their sleeves’ in the digital world. Studies prior to the pandemic had shown us the generational reluctance in all religious communities about the online world and how physical presence was a basic requirement for communities. However, the pandemic came and there was no other way to meet except through the screen. That's when communities responded by joining YouTube, Instagram, Zoom, etc.," Sabaté said.

Sabaté’s study of the impact of COVID-19 on religious experiences is one of 27 KAICIID-supported Fellows initiatives targeted at pandemic response. Her project seeks to analyse new trends among religious communities, including their sudden increased web presence and their immersion in social networks. 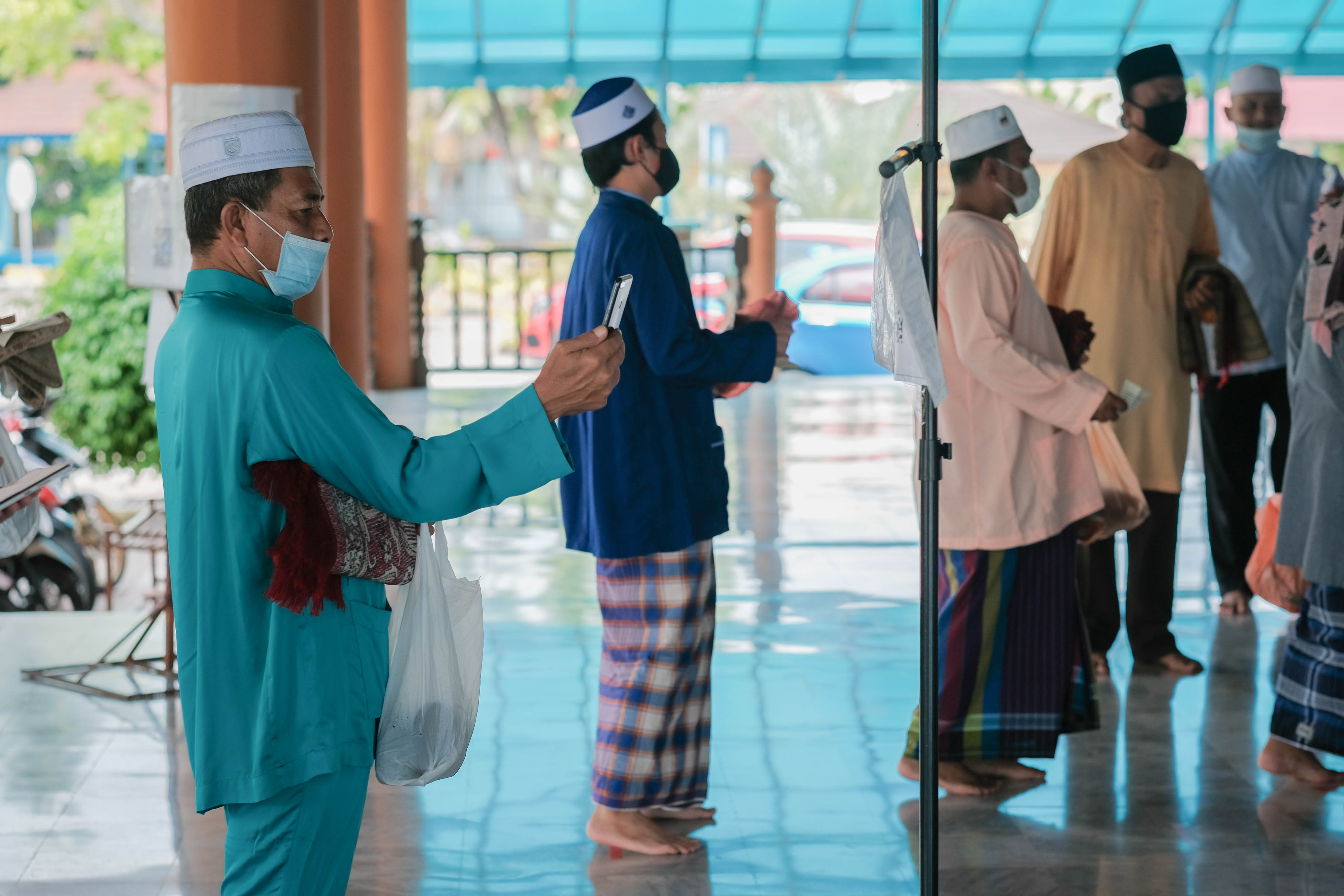 Muslims at a mosque in Malaysia scan QR codes confirming their online registration for Friday prayers, part of a measure meant to support social distancing.

"Mainly, we want to see a distinction between 'religion using the internet' and 'online religion'. Before the pandemic, communities were in the 'religion using the internet’ phase, meaning that they used the internet to announce activities or events or disseminate messages. It was not used to interact with one another because they did this in person. However, the pandemic caused a shift to 'online religion' and digital networks are now used as spaces for celebration, communion and dialogue among members of the same community and also with other communities.”

Sabaté and her research team at the Blanquerna Observatory are establishing "an international catalogue where the digital initiatives that faith communities have set up can be filtered by country and religion.” So far, initiatives include morning prayers on Instagram, the creation of new apps to bring communities together daily, or unique activities to help individuals stay connected during confinement, such as a virtual escape room game to help young people engage with religion in a more enjoyable way.

Although research is still underway, Sabaté says the creativity of these initiatives has already had unexpected reach. For example, when “a small parish in the diocese of Pamplona, Navarre began broadcasting Mass online, relatives of the people in the village who live outside Navarre, and even Spain, began joining the digital Mass.”

Sabaté also highlights the great opportunity for dialogue in this field, as well as how communities of other religions can learn and adapt to each other’s needs and celebrations. "That is where our project can be a point of union between religions, and it is something that really encourages us," she said.

Sabaté’s study will be available in English and is intended to be open access. Although the KAICIID grant covers six months of research, Sabaté says she plans to extend the project, since she is convinced it will prove useful even after the lockdowns are over.

"We will continue to track these trends at a global level because we want to see if this has been a one-time response or if, on the contrary, these changes are more permanent and that they, for example, allow people who are sick or cannot attend religious services to keep practicing their faith," she said.

Sabaté emphasises that the number of individuals who have been left behind in the change to online worship has been very small. "Many people over 60 have decided to start a network profile or buy a smart phone in order to access their religious services – something that otherwise would have been almost unthinkable.”

Online platforms will have impact for generations to come

On the other side of the globe, Swati Chakraborty used her KAICIID grant to develop the WebPlatform4Dialogue in response to the pandemic’s spread in India. The platform aims to provide factual information to network users to combat hate speech and disinformation, as well as to offer a space for dialogue and reflection.

"In India, hate speech based on fake news has been used against the Muslim community due to lack of information. They were accused of transmitting COVID-19. For that reason, I thought it was very important to do something, especially among young people. I also wanted to bring awareness of those on the front lines fighting the coronavirus and so I launched webinars and sessions with key workers whose collaboration may be under-recognised but who are ultimately indispensable," Chakraborty said. 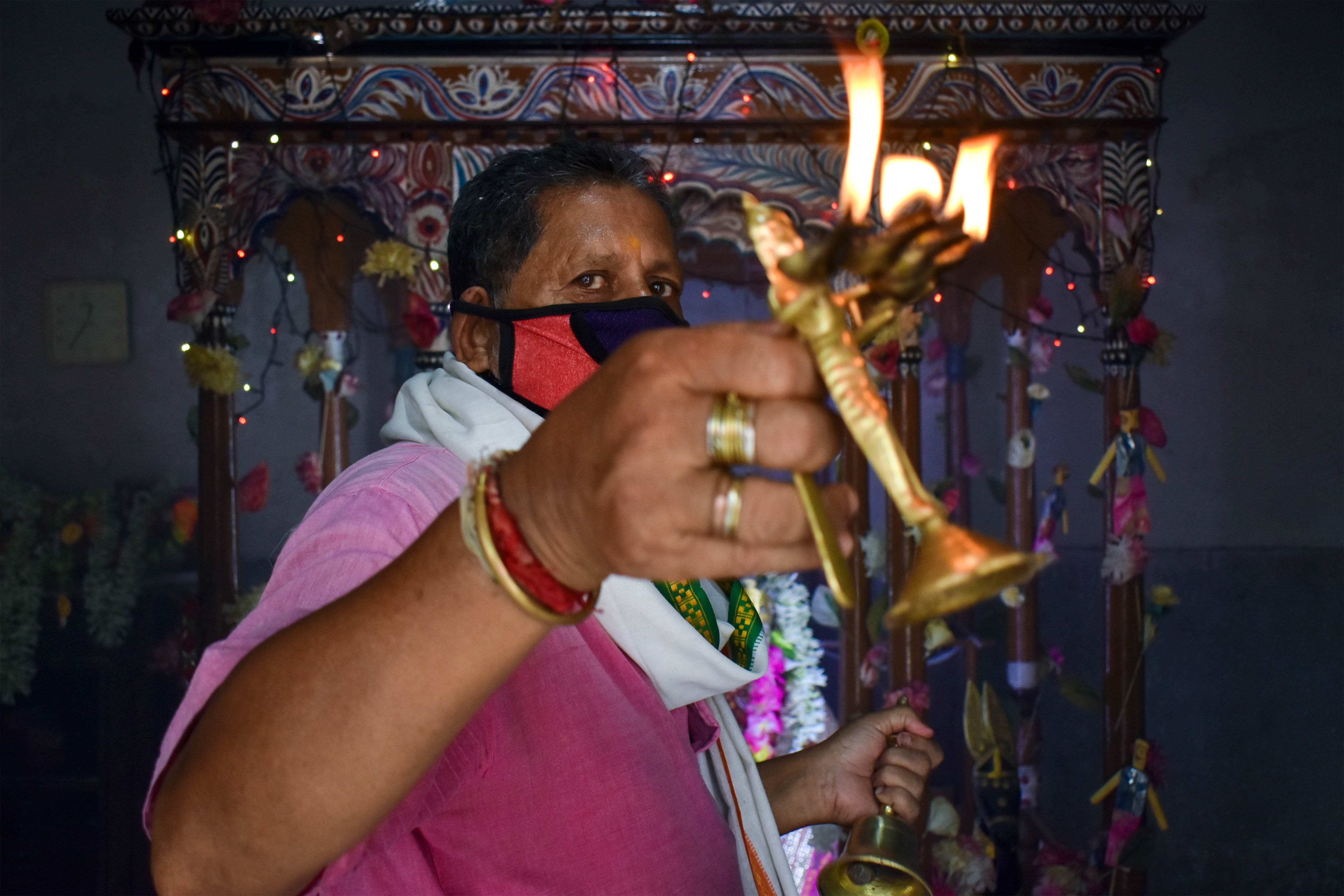 In India, worshippers conduct religious services at the temple while following government regulations.

Chakraborty uses the digital platform, which also has accounts on all major social media platforms in addition to its own webpage, to encourage “quality time with participants, offering an opportunity for them to express themselves, and making them understand that not everything they see on the internet is true and that they must look to the sources to justify their comments.”

Although the platform was developed in response to the pandemic, Chakraborty believes it will have a longer-term impact for generations to come and that COVID-19 will lead humanity towards "unity" and solidarity in any area of conflict. Her goal is to foster peace in society from the local to the national level; and from the national to the international.

Currently there are more than 1,500 people registered on the platform and Chakraborty expects to see many more. “We have common problems, this crisis affects all religions, and we all suffer in the same way. Developing the concept of 'unity', that is, of being one, can be incredibly positive because it will make us dialogue and fight together to get out of this situation. We can be very powerful if we act together, leave our prejudices aside and face COVID-19, and, in the future, any other challenge that is put before us”, she said.

3 May 2021
Tackling the COVID-19 Crisis Amidst an Internet Ban: The Role of Religious Leaders and Local Media in Jammu and Kashmir
END_OF_DOCUMENT_TOKEN_TO_BE_REPLACED

In 2016, then UN Secretary-General Ban Ki-Moon met with faith leaders to discuss Myanmar’s peace and development process. In... END_OF_DOCUMENT_TOKEN_TO_BE_REPLACED

In July 2021, the Cowessess First Nation in Canada found 751 unmarked graves at the site of a former Roman Catholic... END_OF_DOCUMENT_TOKEN_TO_BE_REPLACED

In his own words, Rabbi Alex Goldberg has “reverse-engineered” his career. He pursued a rabbinic education only after... END_OF_DOCUMENT_TOKEN_TO_BE_REPLACED