A Bold Push for Peace in the Central African Republic 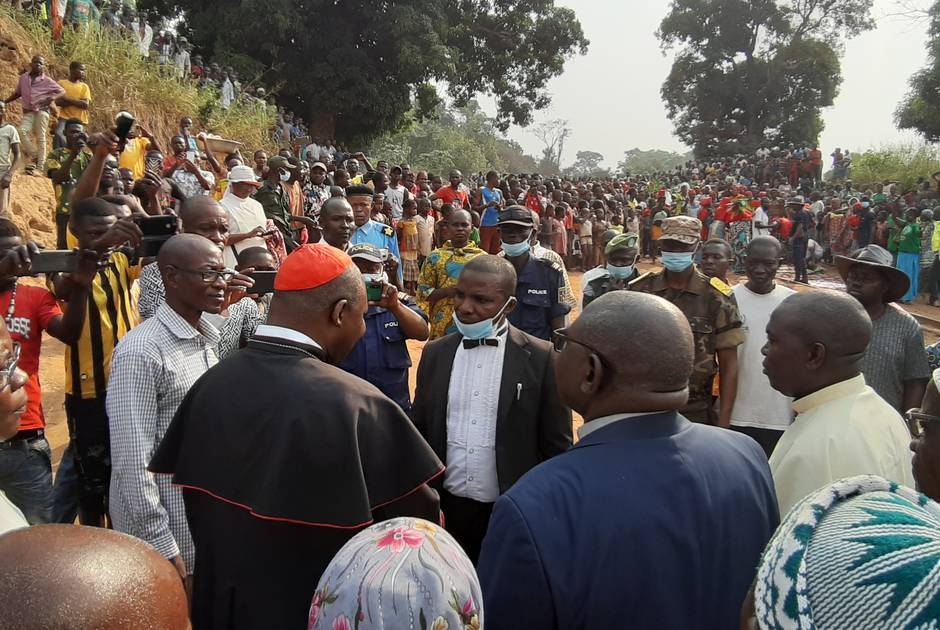 As clashes continue to erupt in the Central African Republic, the country’s leading religious leaders have headed to the front lines in a bold push for peace.

The Reverend Nicolas Guerekoyame-Gbangou, Cardinal Dieudonné Nzapalainga and Imam Abdoulaye Ouasselogue are carrying out multiple missions as part of their tireless battle towards reconciliation, mediating between the opposing sides in this devastating new chapter of the protracted conflict.

“We carry no weapons, but we do have the weapon of faith,” said Cardinal Nzapalainga, the Archbishop of Bangui. “Our brothers and sisters are facing catastrophe. We can’t just watch this unfold on social media. Our duty is to listen, engage in dialogue and find a way out.”

Their deployment comes after a new coalition of armed groups launched a military offensive in December, forcing more than 200,000 people from their homes and exacerbating CAR’s humanitarian crisis. The unrest erupted shortly before presidential elections, igniting battles between this rebel alliance on the one hand and CAR’s pro-government forces on the other.

Aid groups are warning of a surge in attacks against civilians, sexual violence and child soldier recruitment, while the upheaval leaves many in dire need of food, healthcare, shelter and sanitation.

Amid this turmoil, an interreligious group called the Plateforme des Confessions Religieuses de Centrafrique (PCRC) has been promoting a peaceful resolution, drawing on the authoritative standing of its leaders — the cardinal, imam and reverend. Supported by the International Dialogue Centre (KAICIID), the group has appealed for calm through media broadcasts and interviews with the press, or by speaking directly with the government and armed groups.

“We invite everyone to choose dialogue and consultation over violence and the hatred that spreads through social media,” said Imam Ouasselogue.

Besides this important advocacy work, the three religious leaders have left the relative safety of the capital, Bangui, and headed into the tumultuous heartlands of the rebellion. Their objective: to give hope to displaced civilians, to witness first-hand the security situation on the ground, and to meet with rebel groups while championing a peaceful settlement.

“The religious leaders are well listened to by their communities,” said Feralin Mindende-Mobaka, KAICIID’s Country Programme Officer in CAR. “They can bring the parties around the table to discuss the problems that divide them.”

Earlier this month, the cardinal, imam and reverend headed first to Bouar, accompanied by Boris Yakoubou, KAICIID’s Country Expert in CAR. This strategic, western town is located on a key road to Bangui that rebels had blockaded, stopping all aid and food imports from Cameroon and causing prices for the impoverished population to shoot up.

On February 8, the trio met with faith leaders, NGO chiefs, civil society members, journalists and delegates from camps for displaced persons who explained their needs and challenges. Afterwards, they attended a social cohesion event in a district housing the rebels.

“It was a big event that raised a lot of hope and brought life back to the neighbourhood,” said Yakoubou. “They took the opportunity to send out messages of solidarity, comfort and hope.”

That evening, a meeting was arranged in Bouar’s cathedral where the local authorities outlined the threat posed by armed groups. The following day, the leaders visited five sites housing internally-displaced people.

“These people are exposed to hunger and cold, unsanitary conditions,” said Rev. Guérékoyame-Gbangou. “At the last site, we met six women who had given birth to babies less than a month earlier.”

While the cardinal, imam and reverend had planned to meet with the rebels, military developments resulted in the armed groups withdrawing from the town shortly before their arrival.

“Unable to come and meet with us, we communicated on the phone three times,” said Cardinal Nzapalainga. “It's a way of keeping close — to tell them that we haven’t forgotten them, that they are our children. We must continue to maintain contact with the rebels. Those who have taken up arms have complaints, anger, a history.”

Pleading for the renunciation of violence

Later that week, this faith-based taskforce then headed east for similar mediation efforts in Bangassou, a town on the border with the Democratic Republic of the Congo. A rebel attack had forced many of the town’s inhabitants across the Mbomou River.

Accompanied again by KAICIID’s Yakoubou, the trio visited the displaced and met with the regional governor, the town’s mayor and UN peacekeeping officials. A range of concerns were raised, from the population’s security to the destruction of buildings, the disruption to education and the insufficient supply of resources.

“Our mission consists of going to the bedside of thousands of displaced people, consoling them and supporting them with prayers and preaching,” said Imam Ouasselogue, who has been appointed to replace the late Imam Omar Kobine Layama. “We meet the religious authorities, listen to them and strengthen them in their efforts to provide moral, material and spiritual support. We meet with the leaders of armed groups on the ground and plead for the renunciation of violence.”

Besides meeting with the authorities and displaced civilians, the three faith leaders also secured an extended audience with the rebels.

“We spoke at length with the rebels to defuse the climate of suspicion, fear and violence,” said Cardinal Nzapalainga. “We told them that they have a responsibility towards the population to reduce violence and give peace a chance.”

Dialogue - and the potential for forgiveness - is key. “We should not reject [the rebels], but rather show them our heart as loving fathers,” the cardinal added. “Despite their acts, which I condemn, they remain my sons and are capable of change.”

Two further missions are planned to the restive towns of Bambari and Bria, although these trips have been postponed due to ongoing fighting.

Religion is a powerful force in CAR, granting these leaders with profound authority and setting them apart from other types of mediators. According to Yakoubou, more than 95% of the population claim a faith.

“Given the political differences between the government and the rebel groups, religious leaders are the only ones who are capable of speaking to the belligerents, of pleading for the security of the population,” he explained. “They always maintain their neutrality and independence. They do not take sides. They are perceived as the envoys, the spokespersons of God — this makes them different from other mediators.”

CAR's outbreak of civil war in 2013 was initially seen as wholly sectarian, pitting Christians against Muslims. However, allied factions then began turning on each other, eradicating the false impression that this was a 'religious war'. In recent weeks, houses of worship have become a crucial refuge - for both Christian and Muslim civilians who shelter with each other.

In Bangassou, for example, an estimated 500 Muslims sought refuge alongside Christians in Catholic churches. In Grimari, further west, about 1,500 Muslims and Christians have reportedly sheltered in churches.

“They could shelter in town halls, but they go to church sites instead because for them God remains a rampart and a rock when everything has been lost,” said Cardinal Nzapalainga.

“Religion is the only framework that brings together all people of different political, intellectual and social opinions,” said Rev. Guérékoyame-Gbangou. “We are committed to creating an environment of peace for all.”

As a child growing up in Nigeria, Fatima Madaki hoped to study medicine, believing that to be the best way of saving lives... END_OF_DOCUMENT_TOKEN_TO_BE_REPLACED

Trained in the art of interreligious dialogue, these faith leaders are making Nigeria a more peaceful place. For those... END_OF_DOCUMENT_TOKEN_TO_BE_REPLACED

Against the backdrop of prolonged unrest throughout the Central African Republic (CAR), the remote town of Obo was plunged... END_OF_DOCUMENT_TOKEN_TO_BE_REPLACED