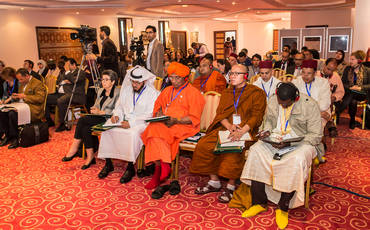 On 14 July 2017, the United Nations Office on Genocide Prevention and the Responsibility to Protect, the International Dialogue Centre (KAICIID) and the World Council of Churches will launch the Global Plan of Action for Religious Leaders and Actors to Prevent and Counter Incitement to Violence that Could Lead to Atrocity Crimes and the five regional action plans developed by religious leaders and faith-based organisations from around the world. The meeting will be chaired by the United Nations Secretary General and will take place in the UN Headquarters ECOSOC Chamber in New York, USA.

4:00-4.50 Panel II: The role of religious leaders in sustaining peace: preventing incitement to violence and implementing the Sustainable Development Goals

4.50-5.40 Panel III: Implementing the Plan of Action for Religious Leaders and Actors to Incitement to Violence that Could Lead to Atrocity Crimes: the way forward
Moderated by Mohamed Elsanoussi, Director of the Network for Religious and Traditional Peacemakers
• Mr. Ahmed Elabbadi , Secretary-General of the Rabita Mohammadia of Oulemas of Morocco (TBC)
• Reverend Bonnie Evans-Hills, Inter Faith Network of the Anglican Communion
• Pujya Sadhvi Bhagawati Saraswatiji, Secretary-General of the Global Interfaith WASH Alliance
• Sheik Nurudeen Lemu, Director of Research and Training at the Da'wah Institute of Nigeria
• Ms. Nancy Falcon, Executive Director of the Center for Intercultural Dialogue Alba
• Reverend Kyoichi Sugino, Deputy Secretary-General of Religions for Peace