KAICIID Board of Directors Approves 2014 Roadmap 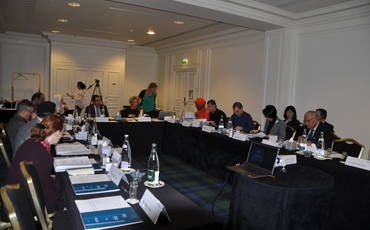 At its first meeting of the year, the Board of Directors of the King Abdullah Bin Abdulaziz International Centre for Interreligious and Intercultural Dialogue (KAICIID) examined and approved the budget for short-, medium- and long-term strategies, targeting the areas of education, media, peacebuilding and crisis intervention, as well as outreach proposals.  KAICIID’s Board of Directors is a multi-religious governing body that oversees the Centre's external activities and internal policies.

The board meeting opened on 22 January 2014 with a review by KAICIID Secretary General Faisal bin Muaammar of the significant progress the Centre had made over the preceding 12 months. In its first full year of operation, 2013, KAICIID launched its flagship programme, the ‘Image of the Other’, conducted four regional conferences and held its first ever Global Forum in Vienna in November.  KAICIID concluded in 2013 Memoranda of Understanding (MOU) with several organisations including the African Union, the Islamic Scientific, Educational, and Cultural Organization, University of Montréal, and the World Scouts Foundation.

During deliberations in Paris, Pascale Courtade, Chief of Religious Affairs at France’s Ministry of the Interior, welcomed the KAICIID Board of Directors, together with the Centre's Secretary General and Deputy Secretary General, Claudia Bandion-Ortner.

Event
11th Board of Directors Meeting