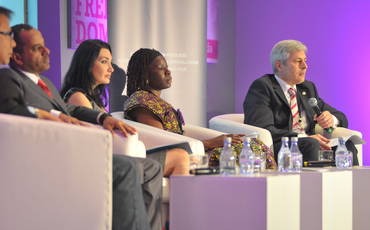 A KAICIID Public Panel on 15 April in Cape Town, South Africa, aimed to bring the participants of the International Press Institute World Congress into dialogue on accurate reporting on religious diversity. The panel followed a day-long working meeting on this topic which highlighted good practice in the field. The panellists were Melissa Chea-Annan, Editor, The Inquirer, and Director of Communications, Assemblies of God, Liberia; Mary Saliba, television producer with Al-Jazeera, Qatar; Khaled M. Batarfi, Senior Writer, Saudi Gazette, Saudi Arabia; and Endy Bayuni, Senior Editor with the Jakarta Post, Indonesia.

The panel was moderated by KAICIID Director of Communications, Peter Kaiser, who opened the panel by stressing the importance of press freedom in ensuring quality reporting.

The presentations by the panellists preceded a lively dialogue with the audience, discussing whether the media has a responsibility to report on positive interfaith stories, or to abstain from reporting on certain news stories for fear that they may incite violence. While panellists and audience alike agreed that the media had historically played a role in inflaming volatile situations, it was also generally agreed that while the decision on what to cover was up to the journalist in question, professional ethics should be followed in taking this decision, as well as how to cover any issue.