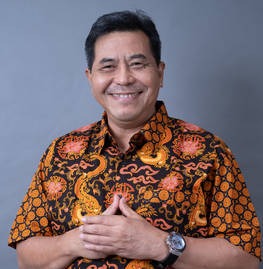 Mulyadi Liang currently works as the Principal of Bright Kiddie Elementary School in Depok, West Java, Indonesia and is also the Head of Education of the Supreme Council of Confucian Religion in Indonesia. Among his experiences in interreligious dialogue are the following: in September 2003 he attended the World Association of Non-Governmental Organizations International Conference in Thailand; the Association of Southeast Asian Nations Pacific Interreligious Dialogue in Phnom Penh, Cambodia in April 2008; the Asia-Europe Meeting in June 2008; the Fourth ASEM Interfaith Dialog in Amsterdam, the Netherlands; the Interfaith Dialogue Indonesia, USA and the Interfaith Dialogue of Religious Leaders in Jakarta, Indonesia in 2009; the Interreligious Leaders Summit in Jakarta, Indonesian in February 2018. He has also been active in interreligious dialogue with other organizations until now.

As a whole, Mulyadi aims to make all people live in peace and harmony, as he is always guided by the words of Confucius: “Within the four seas we are brothers and sister.”