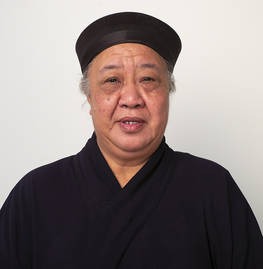 Master Tan Zhixia is a Taoist missionary ordained in the Complete Perfection Quanzhen Tradition of Taoism, the 21st Generation of Longmen Sect.

Besides serving as Priest-in-Residence at the Temple of Heavenly Jade Emperor Yu Huang Gong, a National Monument of Singapore. She is also the Vice President of Taoist Mission in Singapore, an association that promotes Taoism and Chinese cultures and traditions. This gives her ample opportunities in developing Taoist studies and discipline and programmes for community engagement on social cohesion and peacebuilding from the Taoist perspective.

Although Taoism is a religion indigenous of China, it does not deter her from learning and practising Taoism in cosmopolitan city of Singapore. She loves to share about fundamentals of philosophical and religious Taoism, and has been introducing “Tao Ecological Intelligence”, a solution to save Mother Earth and Humanity.  Master TAN Zhixia is very excited to bring Taoism to the Fellows Programme, and is earnestly looking forward to learn KAICIID’s interreligious dialogue and facilitation.

Often she quotes the wise teaching of Laozi, in the scripture Tao Te Ching, “Conduct oneself with the Three Treasures of TAO - Compassion, Frugality and Humility, harmony and peace will always prevail.”