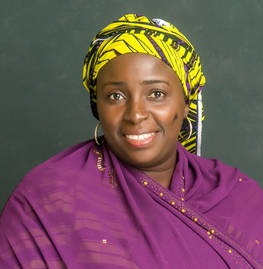 Lantana has extensive experience working in the Nigerian non-profit and peacebuilding sector. Previously, she worked with Search for Common Ground (SFCG) Nigeria managing several projects in the Middle Belt and northeast Nigeria responding to human rights abuses, ethno-religious violence and violent extremism. In addition, Lantana was involved in mediation between pastoralists and farmers in Kaduna and Plateau State and has led many interreligious and inter-ethnic dialogues in Jos, Minna, Maiduguri and Yola. She is actively involved in mentoring women and girls’ participation in peace, security and governance, and was selected by UNWomen Nigeria as one of their Lead Mentors. Lantana currently leads a local women-focused organization known as Women for Positive Peacebuilding Initiative and heads the program design of the Plateau State Peacebuilding Agency. Lantana is a member of the African Union’s Panel of the Wise and FEMWISE, a Network of African Women in Conflict Prevention and Mediation.

Lantana has been involved in many research and evaluations within Africa such as UNICEF’s Analysis of the Situation of Children Affected by Armed Conflict in the Niger Delta and the Northern Region of Nigeria; and the USAID’s Early Warning Response Design Support (EWARDS) in Nigeria and Ghana.

Her motto is "Stand up and get involved, women voices matter".