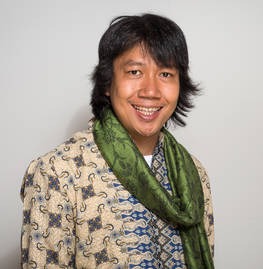 Kris Tan holds a master’s degree in comparative religion from the State Islamic University in Indonesia. He is currently a lecturer in comparative religion at Surya University in Serpong Banten Indonesia. Although he is a follower of the Confucian religion, he studied at an Islamic religious university where he was pleased to learn of the goodness inherent in all religions. He is deeply committed to the furtherance of interreligious dialogue in Indonesia and often delivers lectures on the topic organized by the Ministry of Religious Affairs of the Republic of Indonesia, the Indonesian Bishops' Conference, Supreme Council for Confucian Religion in Indonesia and various universities. His interest in interreligious dialogue has been firmly rooted since 2005 when he was a student and started to understand the needs of communities in Indonesia. He believes that dialogue is crucial to promoting peace and reconciliation. In 2009, Kris represented the Republic of Indonesia as the sole delegate of the Young Indonesian Confucians at the 5th Regional Interfaith Dialogue Forum ‘Future Faith Leaders: Regional Challenges and Cooperation’ in Perth, Western Australia.