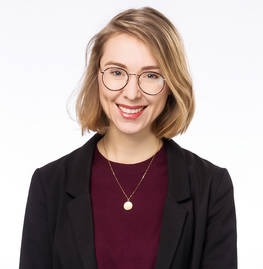 Jana Jakob is a project officer at the Swedish government agency for support to faith communities, where she is mainly responsible for the agency’s educational and capacity building work, as well as special government assignments concerning Swedish and EU-elections. Previously, she worked for the municipality of Stockholm in a democracy project and the Friedrich Ebert Foundation in Hanoi and Berlin.

Jana Jakob is a political scientist, with a Master of Theology in peace and conflict studies from Uppsala University. She has for many years been engaged in interreligious dialogue both nationally and internationally – i.e. as lecturer and trainer at the interreligious organization Tillsammans för Sverige, co-founder of the girls' organization Soul Sisters and organizer of Scriptural Reasoning. In 2015 Jana became A Common Word Among the Youth Fellow and has since then been actively engaged in the global initiative. Jana is focusing particularly on IRD, women’s rights and intersectionality.