His Grace Bishop Maximos of Melitini 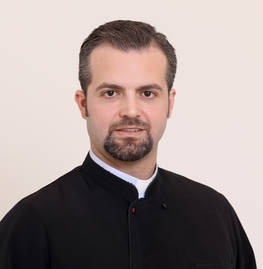 His Grace Bishop Maximos of Melitini was born in Karditsa, Greece in 1978. He studied English literature at the University of Michigan; history at Deree College, the American College of Greece; theology in Thessalonica and Athens, Greece. He received his master’s degree in and communications at the University of Strasburg where he specialized in Religious Diplomacy. His master’s thesis was titled “Eastern Orthodox and Roman Catholic Churches - Diplomacy and International Relations in seeking unity”. He also attended Seminaries in Religious Psychology and Political Analysis at Deree College.

He was ordained in 2003 in Karditsa, Greece, served as a dean in Karditsa; a parish priest at St. Mark’s Greek Orthodox Church in Belleview, Florida; Dean of the Greek Orthodox Cathedral of Holy Trinity in New Orleans, Louisiana; and Secretary at the department of External Affairs of the Holy Synod of the Church of Greece, in Athens. In 2016 he was appointed Vicar General of the Greek Orthodox Metropolis of France (Ecumenical Patriarchate).

He participated in many church delegations as an official representative and took part in many conferences related to religious extremism and the refugee crisis. In 2016 he officially participated as a special advisor at the Holy and Great Council of the Orthodox Church in Crete, Greece.