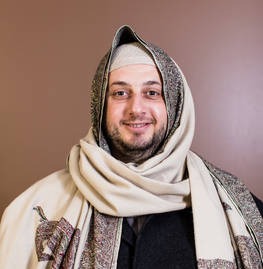 Dr. Hassan Abu Arqoob, from Jordan, holds a PhD in Islamic jurisprudence and its principles from the World Islamic Science and Education University. He worked as an imam and orator for the Ministry of Awqaf, Islamic Affairs and Holy Places from 2001 to 2008. Later, he moved to the General Iftaa’ Department to work as a researcher of Islamic science. He was appointed mufti in 2009 and thereafter promoted to Head of the Printing and Publications Department.

He has been working as the Director of Public Relations and International Cooperation and the Spokesperson of the Iftaa’ Department since 2011. He has also been working as presenter of religious programs since 2011 on several television stations. Currently, he presents the fatwa program Aliftaa Pulbit every Thursday, on Jordanian television. Dr. Hassan pays special attention to human rights issues in general, women’s rights and rights of the challenged in particular, as well as ecological issues.