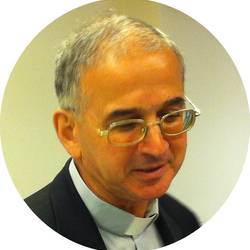 Monsignor Akasheh was born in Karak, Jordan, on 15 December 1954.

After study in the elementary school of the parish in his native city, he entered the Seminary of the Latin Patriarcate of Jerusalem at Beit Jala, Palestine, in 1966, where he completed his preparatory and secondary studies. He was ordained a priest on 30 June 1978. From 1978 until 1982, he served as vicar in the Latin parish of Madaba (Jordan). Thereafter, he was appointed to the Latin Patriarchal Seminary where he taught until 1993. From 1993 to 1994 he worked in Rome on his doctoral thesis, obtaining a Ph.D. in Biblical Theology from the Pontifical Lateran University. He also obtained a licentiate from the Pontifical Institute for Arabic and Islamic Studies, where he later taught Islamic Law. Besides his native Arabic, Msgr. Akasheh speaks English, French and Italian. In 1994 he was asked to join the Pontifical Council for Interreligious Dialogue (Vatican City) to work in the section for dialogue with Muslims. He later became the Bureau Chief for Islam there. He is also the Secretary of the Commission for Religious Relations with Muslims at the same Council. He coordinates, for the Pontifical Council for Interreligious Dialogue, the meetings and colloquia with its Muslim partners in the diverse permanent committees.