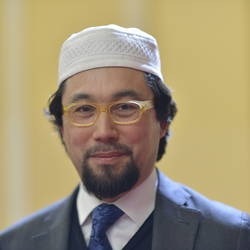 Yahya Pallavicini is president of COREIS, the Islamic Religious Community of Italy, one of the principal organisations of institutional representation of Islam in Italy with a vocation for theological training, ecumenism and intercultural education in the West (www.coreis.it). Yahya has been a member a member of the Italian Minister of the Interior's Council on Islam in Italy since 2005. Moreover, he is member of the ECRL European Council of Religious Leaders (www.ecrl.eu) and ISESCO Ambassador for Dialogue among Civilizations (www.isesco.org.ma).

In 2006 Yahya supported the Message of Amman and participated among the 138 Muslim international scholars in A Common Word Initiative (www.acommonword.com). In 2008 and 2014  he participated in the Catholic-Muslim Forum at the Vatican.

He is regularly invited to the Forum for Promoting Peace in Muslim societies established in Abu Dhabi in 2014 and promoted by Shaykh Abdallah Bin Bayyah. In 2018 he was nominated as Executive Member of the World Council of Muslim Communities as delegate for interreligious dialogue and invited by the Council of Elders for the launch of Abu Dhabi Declaration on Fraternity by Pope Francis and shaykh Ahmad al-Tayyeb from al-Azhar al-Sharif in 2019.  He is among the 22 international Muslim signatories of the document Fraternity for Knowledge and Cooperation (www.christians-muslims.com).

Since 2015, in cooperation with the United Nations, KAICIID and other partneris, he has  been participating in the writing of a Plan of Action for Religious Leaders to Prevent Incitement to Violence that could lead to Atrocity Crimes. Since 2018 he has been coordinating the MJLC Muslim Jewish Leaders Council (www.mjlc-europe.org).