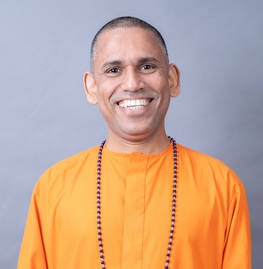 The Venerable Swami Athmadas Yami Dharmapaksha identifies himself as a multi-religious priest and monk with a high level of religious fluidity. Born to parents of interreligious backgrounds (a Christian father and Hindu mother) he was allowed to travel with all possible religious and spiritual traditions. Aspiring to become a Catholic priest, he joined a seminary but discontinued for the pursuit of other religions’ studies. He took traditional monastic courses from various notable Hindu institutions across India, including Chinmaya Mission and Narayanan Gurukulam. He also received initiations and ordinations from other Hindu traditions. His quest to integrate and practice the good elements of different religions led him to the concept of multi-religious priesthood. Thus, his multi-religious centre called “Samanwaya Giri” (Hill of Integration) works for the development of people who are ready to serve society in all possible religious ways. In order to fulfill the community’s requirements, he was ordained as a Carmelite Catholic Priest in the Old Catholic Tradition based in Texas, USA. He also accepted Sufi initiation from the Dasooqi Sufi Sect of Cairo, Egypt. Thus, he performs various religious roles and responsibilities in the area of inter-religious harmony and plurality. He is accepted well by all religious sects, especially by the Muslim community, and delivers speeches about the Qur’an and Hadith. His Centre promotes all religious practices like Muslim Namaz, the Holy Eucharist, Agni Hotra and various other denominations’ rites and rituals. He fights against all sorts of fundamentalism and fanaticism through positive psychology, especially old tools like the Enneagram. He runs various courses for the laymen with the help of various government departments. His motto is “Let us build a better world”.