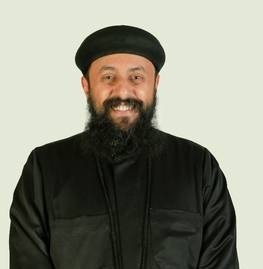 Father Makary holds a bachelor's degree in commerce and business administration and two masters in cost accounting and tax accounting. In 2004, he went to the priesthood at the San George Churche, Shobra Elkhema Bishopric.

He is an instructor in the Coptic clerical and Theological College of Cairo in Shubra El Kheima. He is also a member of several institutions such as the Council of Churches of Egypt, Youth Service Committee and member of the Public Relations Committee In bishopric Shubra el-Khima.

In addition, he is a media officer and a citizenship officer. He is involved in the establishment of several popular committees (Muslim - Christian) to resolve conflicts, counter terrorism and national education and has organized several conferences and cultural and national meetings. Moreover, he has published many spiritual and theological books.