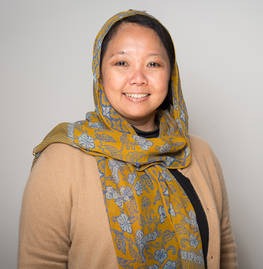 Alissa Qotrunnada Munawaroh Wahid, publicly known in Indonesia as Alissa Wahid, is a trained family psychologist, but is most recognised for her work in the social sector on multiculturalism, democracy and human rights and moderate Muslim movements in Indonesia. She currently focuses on leadership development for interreligious youth leaders.

She is the National Director of Gusdurian Network Indonesia (GNI), named after her late father, President Abdurrahman Wahid who is also known as Gus Dur. GNI hosts thousands of grassroots-level activists in more than 100 cities in Indonesia, working to promote interfaith dialogue and understanding, active citisenship, democracy and human rights. GNI is known for its work at the local level, for example the 2015 International Day for Tolerance that took place in 50 cities.

Alissa has a master’s degree in psychology and is also active in Nahdlatul Ulama (NU), the biggest Muslim organisation with more than 50 million members, as General Secretary of its Family Welfare Agency. In this role, she aims to promote just, strong, and moderate Muslim families.

Wahid meets with and speaks to thousands of people annually through public events. She is a Civil Society Ambassador for Sustainable Development Goals in Indonesia, focusing on Goal 16: Peace, Good Governance and Access to Justice. She received Indonesia Shine-On Award in 2015 from Good Housekeeping Indonesia magazine. She was also awarded the Women Award 2016 from Indonesia Marketing Week.

Wahid dreams of a just and peaceful world. As a leader, she lives by the principle: ‘without integrity, no one listens; without trust, no one follows.’