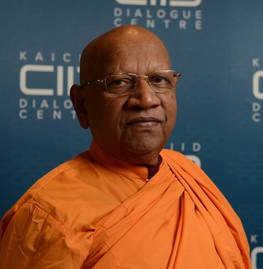 For many years, Venerable Thero  worked  to enhance interreligious harmony in Sri Lanka, a country with a long history of interethnic conflict as a consequence of a protracted civil war.  He was instrumental in the establishment of the National Sangha Council, an umbrella organization of Buddhist communities in the country.  He was a leading voice for interreligious dialogue in Sri Lanka, and a renowned authority on matters of faith, literature and language.

Venerable Thero was a member of KAICIID’s Advisory Forum since its founding in 2016. His deep knowledge of the region, and his expertise were a valuable and treasured resource for the Centre’s work.

The Centre’s Board of Directors, Advisory Forum and the staff extend their sincerest condolences to the family, friends, community and students of Venerable Thero, and to the people of Sri Lanka for their loss, and will hold his memory dear.

Born on April 14, 1942, Venerable Professor Thero was educated at the Nikape Sri Vijayaraja School and thereafter at the Piliyandala Central College. He took holy orders at the age of 13, following in the footsteps of his older brother.  In 1957 he entered the Peliyagoda Vidyalankara Pirivena (monastic college). In 1963 he was admitted to the Vidyalankara University in Sri Lanka. He began his career at the University of Sri Jayawardenapura as an assistant lecturer. At the time of his passing, he was the chancellor of the university, a post he had held since 2000. In the course of a distinguished career, he received a Doctorate of Philosophy (PhD) from the University of Lancaster, United Kingdom, and was a visiting professor at the School of Oriental and African Studies University of London, United Kingdom.

He also served as the Deputy Chief (Anunayaka) of the Kotte Sri Kalyani Samagri Dhamma Maha Sangha Sabha of the Syamopali Maha Nikaya.