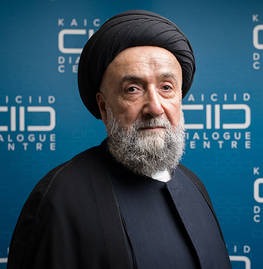 His Eminence Sayyed Ali El-Amine is a Lebanese Muslim religious authority who studied under several Grand Ayatollahs in the city of Najaf, Iraq, where he reached the clerical rank of ‘Mujtahid’ – the senior level of clerical accomplishment. Afterwards, he taught senior clerical students, both in Islamic jurisprudence (al-fiqh) and the Principles of Islamic Jurisprudence (Uṣūl al-fiqh) in a number of seminaries in Iran, Iraq, Lebanon and Syria where many graduated under his supervision. He headed the ‘Islamic Law’ seminary in Beirut, and the al-Sadr seminary for Islamic Studies in Tyre, Lebanon, where he also held the position of Mufti of Tyre and Jabal Amel. He is a member of the Muslim-elders Council.

His Eminence calls for interfaith dialogue and emphasizes mutual coexistence between Christians and Muslims and advocates for Islamic solidarity and unity. Sayyed El-Amine has given numerous lectures to disseminate religious consciousness and religious moderation and naturally rejects hate, intolerance, extremism and terrorism.

Sayyed El-Amine is the author of several books including:  “Sunni and Shiite are one Nation” (al-Sunna wāl Shia ûmma wahída); “Between Cogitation and Blasphemy” (Zobdāt al-tafkír fí råfd al sāb wāl takfír), “ ‘Wilayat al-Fakih' and the Nation State”, “A Series of Lessons in the Principles of Islamic Jurisprudence” and “Letter of Moderation in the Face of the culture of extremism and terrorism.”