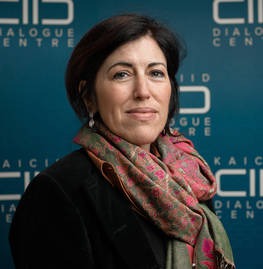 Elected Councillor, Executive Board of the Union of Italian Jewish Communities

Eva Ruth Palmieri is a Member of the Executive Board of the Union of Italian Jewish Communities, as an elected Councillor. She is also co-founder of a women’s movement of Italian Jewish leadership within the Union, member of the Union’s Interreligious Dialogue commission, co-founder and co-president of the “D.I.A.L.O.G.U.E” Association aimed at furthering interfaith and intercultural dialogue and combatting discrimination and prejudice on religious grounds. She is also Co-Producer of “Dana’s Steps”, a documentary on interfaith understanding, in Italian and English, that has been screened at interreligious film festivals.
She is curator of “Otherness”, an interfaith documentary used as a tool against discrimination on religious grounds, screened in Italian high-schools, with the support and sponsorship of the Union of Italian Jewish Communities. She is also a member of the Executive Council of the Rome Jewish-Christian Friendship Association, and is enrolled in advanced interreligious studies towards a doctorate at the Pontifical Gregorian University in Rome. Additionally, she is a simultaneous translator (English – Italian, Italian – English) specialized in Vatican and interreligious conferences held in Italy and in other EU countries and translator of the English edition of SIR, a Catholic news agency.