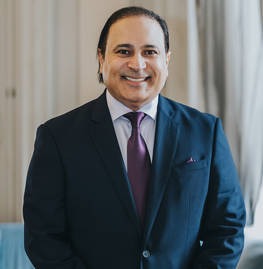 Dr. Alharthi was a member of the Board of Trustees of the King Abdulaziz Center for National Dialogue (KACND) in 2018 and his membership was renewed in November 2021 for a period of three years.

Dr. Alharthi worked at the Saudi Public Prosecution in 1994 until he was appointed Head of the Investigation and Public Prosecution Department. In 2008, a royal order was issued appointing him as a member of the Council of the Human Rights Commission and the official spokesperson.

Dr. Alharthi has written for several Saudi and Arab newspapers for about thirty years. He is a prolific and renowed writer and researcher on issues of ideology, politics and law.

Dr. Alharthi serves as a member of several boards of directors for private and charitable organizations. He has participated as an analyst and political expert in political and news programmes on cable channels for about twenty years. He also contributed to several Arab and international conferences and forums. He wrote a number of papers, research articles, and various articles on the role of media, tolerance, coexistence, counterterrorism, religious intolerance, racism, human rights, political Islam, the clash of civilizations, interculturalism, regional issues, and Gulf-Iranian relations, and others. Currently, Dr. Alharthi is a columnist in Asharq Al-Awsat newspaper.