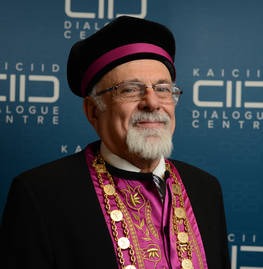 The Chief Rabbi of Turkey, Isaak Haleva, was born in Istanbul in 1940.

He graduated from the Beyoğlu Jewish High School and continued his higher education at the Porat Yosef Theological Academy in Jerusalem. He learned under important theologians of the time such as Rabbi Ovadya Yosef and Rabbi Shimon Baadani.

He graduated from the Academy as a Rabbi having received special training in education and religious justice laws. Upon his return to Jerusalem, he served in different capacities as a rabbi & educator.

He served as a member of the Beth Din of the Chief Rabbinate and because of the advanced age of his predecessor Chief Rabbi David Asseo, he took up the responsibility of Deputy Chief Rabbi of Turkey for seven years.

Furthermore Chief Rabbi Haleva gave lessons in classical & modern Hebrew as well as the History of Judaism to undergraduate and graduate students in the Theological Studies Departments of Marmara University and Sakarya University. Through this work, not only did he educate the students but also created a special understanding between Jews and non-Jews and became a bridge between theologians of different religions.

Starting from the 1990s, with the new initiative of “Interreligious Dialogue” meetings and symposiums organized both in Turkey and in the international arena, Chief Rabbi Isaak Haleva has participated and made presentations at conferences and panels. A member of the Conference of European Rabbis, he participates at their yearly meetings and continues to make presentations.

Following the passing away of his predecessor, Chief Rabbi David Asseo, Chief Rabbi Isaak Haleva, as the only designate of the community was elected in autumn 2002.